Stopover in Rangiroa : Change of plan 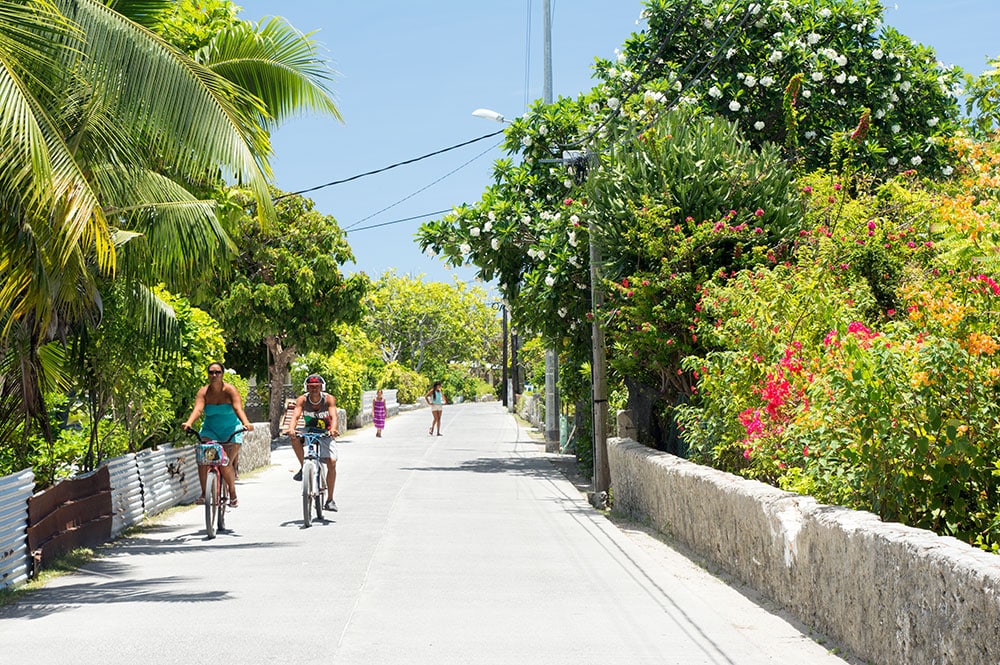 Rangiroa est l’île principale des Tuamotu. Pourtant, rien à voir avec une ville urbanisée et cosmopolite : nothing to do at all. To put it simply, Rangiroa has 2,000 inhabitants, two villages, two passes, one road, and is twelve kilometers long and 300 meters wide. This small inhabited strip is only a small part of the belt of the atoll, which is so large that we cannot see the other end.

However, when we arrive on land, we discover that despite its "other side of the world" aspect, there are the minimum necessary facilities. In the center of town, we find grocery stores, snack bars, several churches, an elementary school and even a fire station! Of course, this is not the greatest luxury, but there is everything. What strikes us is that although the atoll has the same number of inhabitants as Hiva Oa, our last stopover, and is much closer to Tahiti, the place seems less developed. There are no marinas and no boat facilities, the shelves are less well stocked and overall, the facilities are more dilapidated. Later, a teacher confided to us that Rangiroa is the ugly duckling in this respect and that even the school infrastructure is behind what is done on the other islands of French Polynesia.

Yet, the island is important : It is the center of all the economic and social activities of a large part of the Tuamotu archipelago! For example, from the sixth grade on, children from neighboring atolls come to the island to attend boarding school (which unfortunately stops for most of them at the end of high school because the high school is in Papeete). There are also many inhabitants living from tourism, especially thanks to the lodges and pensions that welcome tourists on this world famous diving spot. We therefore have a little difficulty in understanding how such a touristy place with such a potential is so much left out.

However, as soon as we arrived on land, it was not really this "desert" that struck us but rather the population. While we were going around the city, always accompanied by our Serbian teammate, we were quickly approached by a child. Not shy, she discusses directly with us and offers to take us on a tour. Finally, the visit quickly turns into a walk to the gym as many other children were playing volleyball and soccer. As comfortable as ever, she suggested that we join them and we gladly entered the circle. At first, the children are shy; they look at us in the corner and don't dare to express themselves, but after a few minutes, we are part of the group! We dreamed of this moment of sharing: Playing with children on the other side of the world is something we've seen in adventure movies and novels, and here we and the children are the main actors! The moment is quite strong for us.

The passing game will continue for many minutes until a man, about 35 years old, not very tall but with the build of a sportsman, proposes to play soccer all together. So I find myself in Daniel's team who is a fireman. The man is strong and all the children know him. With us, children of different ages play and the spirit is good: there is no competition but only the pleasure to play together.

It's an incredible moment of sharing because shortly before we didn't know them and now we play with them like old friends. That's Rangiroa's hospitality. Wherever we have gone, we have always been received in this way: with benevolence, simplicity and kindness.

This does not mean that the contact is always easy, far from it! The next day, for example, we were invited by Daniel for a volleyball match with the adults this time and for the blow it was really different. Always this good mood but without the sound. To make it simple, they did not exchange a word between them: neither to make the teams, nor to announce the beginning of the match, nor in the game, nor to stop the game. Everything is done by non-verbal communication and we must admit that it is disconcerting, especially when you play volleyball badly with people who play very well!

Cut off from the world can be a good term to explain the difficulties we met there. The stopover in Rangiroa had two objectives: to discover this place we had heard so much about and to continue working for the association. So, if it is true that from a point of view of scenery, turquoise waters and coconut trees we were served, for the work part, it was much more complicated. To make it simple, there are very few places with Wifi and if there is, the connection is so bad that just making a phone call on What's App is an achievement. Another problem is that the restaurants offering a connection are located at the other end of the village, so we also have to hitchhike. Fortunately, we have to hitchhike too, the locals are lovely and always catch us quickly. All this to say that the media work is difficult for Lucas.

In parallel, Emilien and I are working on the boat. Everything is going well until, after two hours of scraping the hull, I feel a sharp pain in my left ear. I get out of the water and I feel that something is wrong. Luckily, the doctor's office was still open so I go there and the verdict is in: left eardrum pierced. So I was deprived of diving and more globally of swimming for at least a month and a half... Emilien had the chance to dive and what he told me made me dream: he saw dolphins, a turtle, sharks, giant barracudas, ... It is only a postponement in New Caledonia! Especially since we were not left behind in terms of sharks on the atoll, because one evening we saw huge grey and lemon sharks in the small harbor of Rangiroa. They are there, 2 meters away from us and we are very happy to observe them from the top of the pontoon rather than in the water!

It is important to remember that the marine fauna here is exceptional and that sharks are part of the normality. One evening, we had the chance to see a whale entering the lagoon: it was an incredible sight, as it was so early in the season. The locals are used to this kind of animals and when we go fishing with our friend Daniel, he explains us that we have to bring the fish back quickly otherwise the sharks will eat it. What he had forgotten to say was that these sharks were probably lemon sharks of about three meters! So when Emilien, who was holding the line in his hand like all of us, did not manage to reel in the fish fast enough, he was quite surprised!

He was just pulling up his catch when suddenly he flew up and caught himself just short of falling into the water! The powerful shark had almost knocked him overboard and the wire had cut his leather glove and part of the skin around one finger: here, fishing is not a joke.
We still leave with four fish: two duckbills and two perch.

After a few days on site, scouring every corner of the city, from the pearl farm to the pizzeria, we decide to leave. Nevertheless, we are forced to change our plans because our planned stopover: Niue, has its borders closed: we will have to go directly to New Caledonia.

Unfortunately, the lack of infrastructure on Rangiroa does not allow us to prepare properly for a long crossing and we still have some work to do before leaving for so much time at sea. So we decide to set course for Raiatea, an island located 260 NM southwest of us, which is supposed to be much better equipped than Rangiroa. We already know that there are marinas, a shipyard and supermarkets there, so we can better prepare our last part of the Pacific crossing.

So we left this little paradise on Saturday morning at 8am, heading for our last stop in French Polynesia.

If you liked the article, your donation can give us a great boost! 🚀